For the first time, newsrooms can collaboratively share accurate coverage of breaking news thanks to the launch of Realtime Transcription and Translation.

London (September 12th, 2019) - For the first time, newsrooms and content producers will be able to collaboratively edit, verify and share accurate coverage of breaking news and live events virtually as they happen thanks to the launch today of real-time transcription and instant translation tools by Trint, the leading automated transcription and online productivity platform.

Hailed as an “unprecedented voice transcription technology” by Wired, Trint uses AI to convert recorded audio and video to text with up to 99% accuracy rates. Its enterprise and team clients include The Associated Press, Reuters, America’s Test Kitchen, The Washington Post, Vice News and Der Spiegel. Trint was founded by Jeff Kofman, an Emmy-winning broadcast journalist and war correspondent with ABC, CBS, and CBC, who estimates he manually transcribed thousands of hours of audio during his more than 30 years in television news. 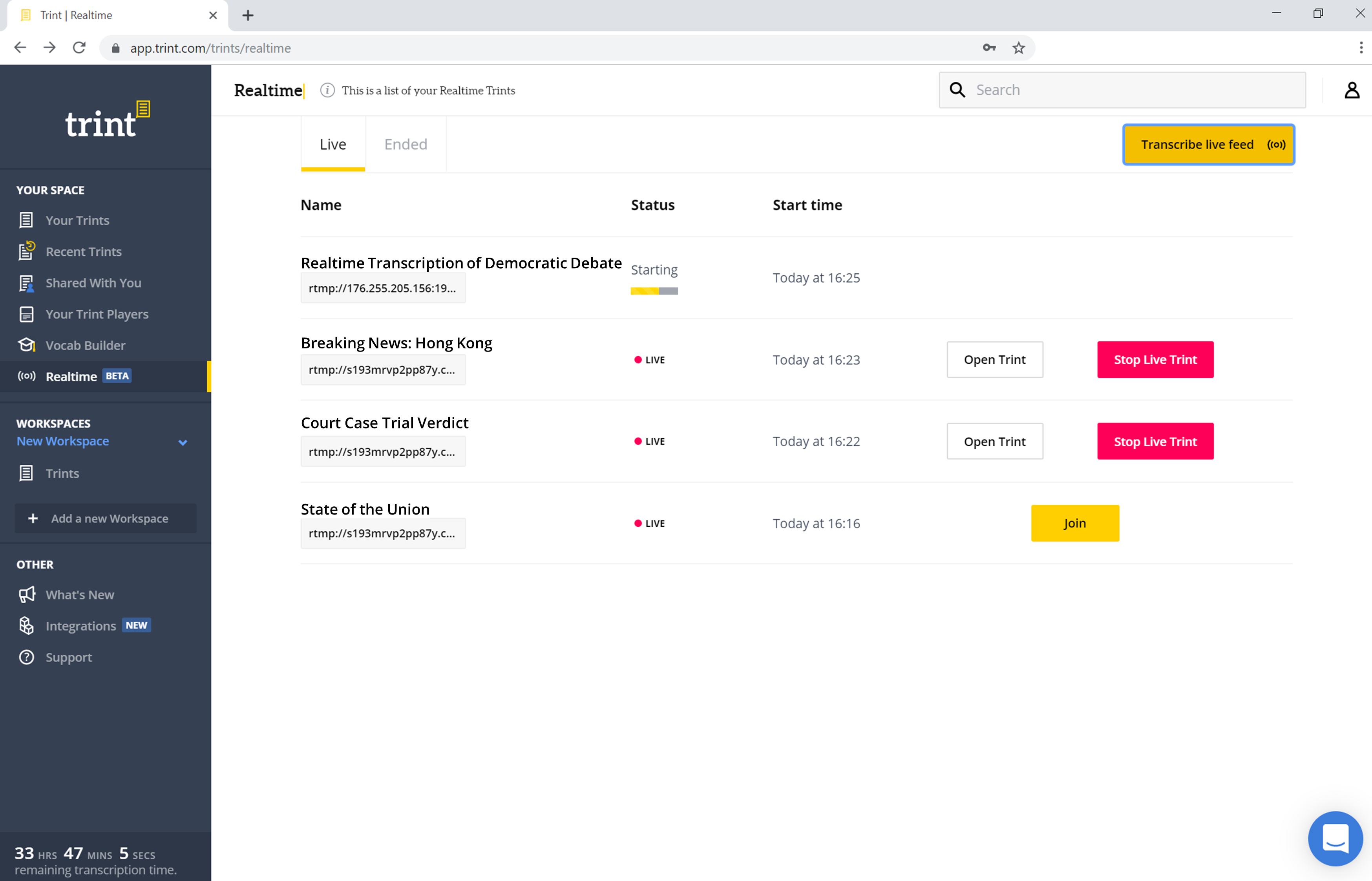 “There’s more pressure than ever before to cover news and live events as they unfold, and at the same time ensure that the coverage is accurate and trustworthy,” said Kofman. “Trint’s new feature gives newsrooms and content producers the tools they need to find the moments that matter most and be the first to share them with the world.”

According to Kofman, it takes a minimum of three hours to manually transcribe a one-hour event. Journalists know the drill all too well: repeatedly playing, rewinding and pausing recordings until they have manually typed a perfect transcript.

With Trint’s groundbreaking Realtime Transcription, users simply plug a livestream feed from any breaking news event into Trint’s online platform. The interactive transcript appears in the Trint Editor, which combines a text editor with an audio/video player, gluing the live source audio to the words on the screen just three seconds after they are spoken. As soon as the Realtime session starts, dozens of users in multiple locations can access, collaborate, edit and publish the most meaningful moments as quotes and soundbites while the event is still happening. Once the live event is over, the verified transcript is saved and searchable for future reference.

Kofman said Trint plans to expand Realtime Transcription to its iOS mobile app before the end of 2019. This will allow anyone to use a smartphone to create a livestream of an interview, meeting or breaking news event that can be connected to the Trint platform for instant transcription, verification and publication. Colleagues anywhere can follow the livestream and disseminate content as it happens.

“Newsrooms today are under huge pressure to break news and present accurate information at warp speed,” said Sandy MacIntyre, VP of News for The Associated Press, an early adopter of Trint Realtime. “Video of live events helps us to do this in real time, but having a machine rather than a human produce a text transcript alongside the video is a game-changer. It means journalists are emancipated from the time-consuming ‘grunt work’ of manual transcription and more of their time can be spent on figuring out the importance of what was said and why the audience should care.”

MacIntyre added: “We estimate a 30-minute live press briefing used to take a minimum of 60 minutes to manually transcribe, whereas with Trint’s new tool we can get a near-perfect transcription in close to real-time.”

Trint Translation is designed to eliminate the language barriers that have long slowed down coverage of global events and news. Users can upload recorded audio and then instantly create a transcript in more than two dozen languages - from Chinese Mandarin and Hindi to Japanese and Spanish - to provide Trint users with a baseline of understanding of what is being said in seconds. Teams can then work collaboratively to get a fully translated and accurate transcript that can be shared, along with video containing translated captions.

“Trint Translation removes one of the greatest barriers to communication today: language. Although the A.I.-powered translation isn’t perfect, it gives users a first draft that they can use to draw the insight they need to shape their stories and content. Translations can then be easily polished to perfect with the Trint Editor,” said Kofman.

All of this happens in Trint’s fully encrypted, high-security cloud. Trint has been formally recommended for ISO27001 data security certification from the International Standards Organization and expects final certification imminently. The highly secure platform sits alongside a company policy that guarantees customer data is neither used to train the machine-learning algorithm nor seen by anyone other than Trint users.

Launched in 2016, Trint is a productivity platform that takes professionals beyond automated transcription, changing the way they work with audio/video to produce content and insights. By combining a text editor and an audio/video player into one easy-to-use platform, Trint unlocks the value of the spoken word by letting users capture, find, and share the moments that matter. Backed by funding and support from The Associated Press, TechNexus Ventures, Horizons Labs and the Knight Enterprise Fund and two grants from the Google Digital News Innovation Fund, Trint is transforming the management of recorded content in 28 languages with a unique collection of features that includes multi-user editing of transcripts, recorded and transcribed phone calls with its iOS app, instant search of recorded content, and seamless enterprise workflow integration. For more information visit www.trint.com. Follow Trint on Twitter (@TrintHQ) and Facebook.